Dwirahmi Suryandari
Communication and Outreach Officer
January 16, 2018 . 3 min read
Back to previous page
<<
The opportunity to be a speaker at the Field School was taken by Reanes so he could understand issues at the community level. Photo: Rais Wildan/Mercy Corps Indonesia
>>
VIEW ALL
1 photos
ACCCRN Champion Author: Dwirahmi Suryandari, reanes putra Posted on January 16, 2018 Comments

Like most cities in Indonesia, Semarang, along with the surrounding Semarang Regency, are facing waste management problems. While Semarang has received Adipura (i.e. an award given to cities which are successful in managing their cleanliness), the city is still facing great challenge to manage waste. Each day, Semarang produces 1000-tonnes of waste, while only 15% of it has been self-managed by the community. This has motivated Reanes Putra Tito Magarwi to initiate a startup company called Sampah Muda.

In Bahasa sampah means trash and muda means young, so the company’s name means a community consisting of youngers who help communities to deliver their household or office trash to the collectors. The customer (i.e. person who owns trash to be collected by Sampah Muda) will get paid for every bit of trash they give.

Customers have to sort their trash into three different groups (plastic, paper and organic). The plastic and paper waste should be dried before being submitted to Sampah Muda. Trash that has been collected by the team are stored in their storehouse. All of this trash will be sent back to the factory to be recycled.

“I used to collect paper trash and sell it to the factory.” After having done it for quite some time, he figured out that waste problems are very complex. “It’s beyond trash collecting and selling activities,” he added. This understanding has motivated him to create a platform that can educate communities on the importance of waste management.

In 2016, Reanes establish the company with one of his colleagues. Sampah Muda can be accessed through its website have already paid IDR 29 million to their customers and deliver approximately 27 tonnes of trash. “This is actually a small amount, compared to total daily trash in Semarang that can reach 1.000 tonnes/day,” he explained. 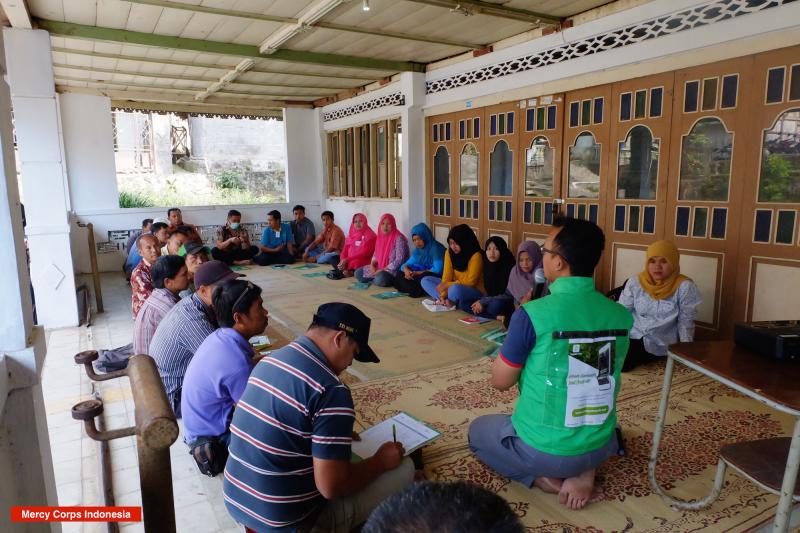 They are planning to promote innovative actions for waste management, by conducting workshops that aim to turn trash into goods. “Teaching the community how to turn trash into goods that can be used every day will encourage them to participate in the long term,” he said. He believes that the community will join an activity that will benefit them, in term of goods they have made from recycling or money they get from collecting their trash.

The biggest challenge of Sampah Muda is to change the existing behavior of the community, as well as to raise their awareness. From his perspective, there are still a lot of people who don’t understand the benefit gained from organizing trash, whereas it makes it easier to recycle.

While some of the villages have already installed waste banks, it still needs a lot of improvement, particularly in terms of the management. “Kalisidi is one of the villages which has great potential to drive the waste management movement by conducting an initiative to turn trashes into goods, for example they turn organic waste into compost, and turn plastic bottles into pots etc.” he explained to us.

He believes that active involvement of a diverse range of agency and trans-boundary partnerships between Semarang City and Semarang Government will support environmental conservation and disaster risk reduction within the areas.