Blog
Why We Should Involve Adolescent Girls into Resiliece Practice

Farraz Theda
Member Relation and Fundraising Coordinator
November 13, 2017 . 3 min read
Back to previous page
<<
How a common girl in your area looks like? girls were asked to draw and create a character based on her perception. Photo: GirlSPARKS
>>
VIEW ALL
1 photos
Takeaways Author: Farraz Theda Posted on November 13, 2017 Comments
GLOBAL

It may be widely known that children are amongst the most vulnerable when extreme weather strikes. Specifically, global research shows that women and children are 14 times more likely than men to die or be injured due to a disaster, an effect that decreases or disappears as social inequalities between men and women decrease. In addition to high fatalities, loss of homes and livelihoods, women and girls also experience more intangible losses.

In the wake of disasters that destroy people’s homes and livelihoods, climate-driven migration is increasing, raising the risk of child exploitation and trafficking, particularly for girls. In Bangladesh, climate change has been linked to an increase in the number of girls forced into child marriage or prostitution in cities, often by desperate parents that have no other means to provide for their families. Bangladesh already has one of highest rates of child marriage in the world at 52%.

The poorest adolescent girls living in the poorest communities, numbering more than 200 million living in households in the bottom two wealth quintiles, are at special risk of being deleteriously affected by climate change. Girls and women frequently have to walk for up to two hours, twice a day, to find safe water, consuming huge amounts of energy and time, and exposing them to the threat of sexual violence and abuse.

In response to this challenge, GirlSPARKS – formerly known as Girl Effect University under the Nike Fondation, now rebranded and adopted by Mercy Corps – aim to improve development practitioner capacity to work with adolescent girls. “There are actually a lot of donors who have been investing in adolescene girls, however, often the programs have failed to reach the most marginalized groups,” said Julisa Tambunan, Director of GirlSPARKS, as she conveyed her concern. She added,“The program is usually targetting the visible girls, who are in school or who live in urban areas, where the most vulnerable and marginalized girls reside, either in the rural areas, or who have to stay at home fulltime for domestic work.”

There are a lot of reasons that caused programs to fail to reach adolescent girls, ranging from the limited capacity of development agencies, to socio-cultural differences. So, what have GirlSPARKS done? They collaborate with local NGOs that work at the grassroots level to improve their understanding of applying a girl-centred approach into the program design. 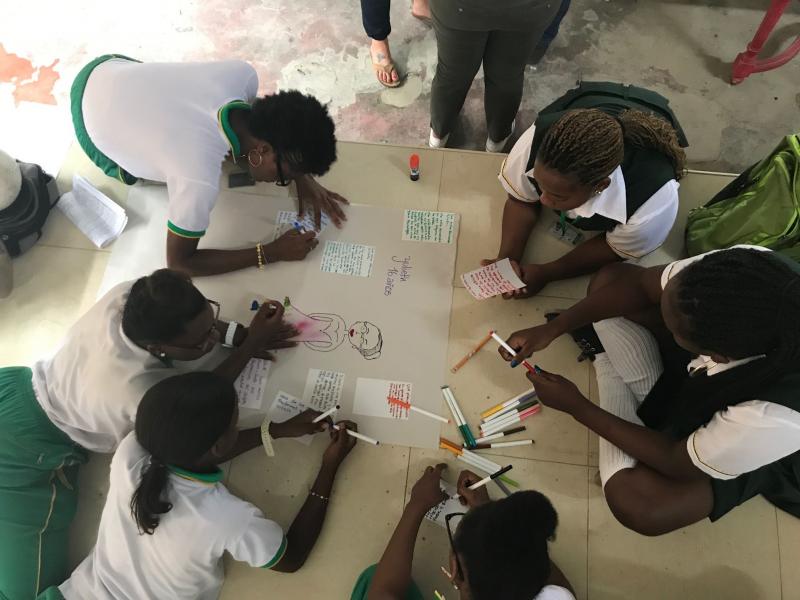 Julisa introduced three core principles of this girl-centred approach;the first one is “find her”. It is important to know who exactly we want to reach throughout development practices, and why they have to benefit from the program?. The second is to “listen to her”, find out what problems they are facing and engage them throughout the program cycle. The last one is “design with her”; Julisa explained that, as development practitioners, we often design for her, without validating her needs so the program fails to benefit her.

“By educating adolescent girls, we will create ripple effects that can positively impact the country’s GDP.” said Julisa.

Girls who are educated are more likely to have the chance to work. Furthermore, when they have the opportunity to earn an income, girls and women reinvest 90% of their income into their families and have the power to boost their country’s GDP by 2%. This definitely will reduce poverty and help to achieve SDG’s.