Blog
What’s Next After COP 23?

Farraz Theda
Member Relation and Fundraising Coordinator
December 18, 2017 . 2 min read
Back to previous page
<<
As the COP 23 ended, what is next for our climate resilience agenda? Photo by: climate tracker.org
>>
VIEW ALL
1 photos
Takeaways Author: Farraz Theda Posted on December 18, 2017 Comments
ASIA

November has been a hectic month for governments, cities, states, regions, companies and civil society from over 190 countries who joined the 23rd meeting of the Conference of the Parties (COP 23) to the UN Framework Convention on Climate Change (UNFCCC) (COP 23) in Bonn, Germany. Two years after the Paris Agreement, COP 23 discussing “What progress has been made, and how to achieve the ambitious target of Paris Agreement”. This year, the meeting has also talked about the urgency to raise ambition in mobilizing support for loss and damage from climatic events around the world. 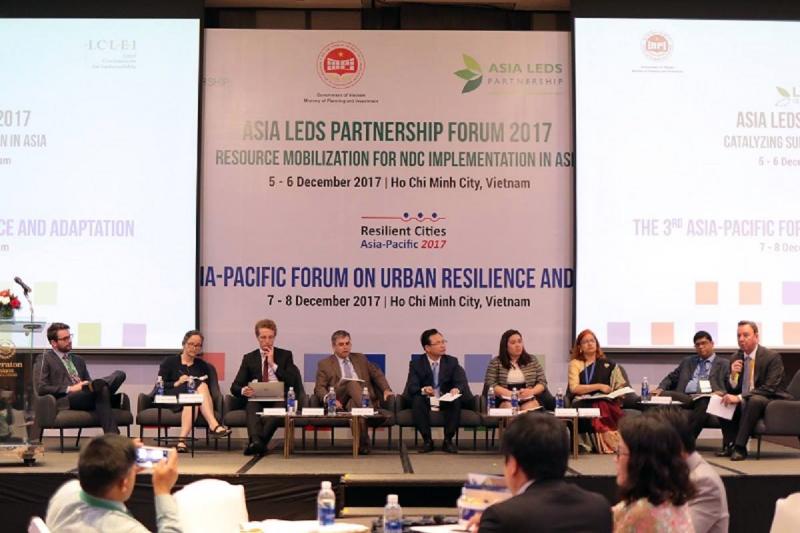 During the 3rd Asia-Pacific Forum on Urban Resilience and Adaptation, various UN agencies discussed the role of local and sub-national governments in the implementation of the National Determined Contribution (NDC), as well as the impacts of COP 23 on ongoing resilience dialogue through local action.

David Oehmen, Associate Programme Officer, Adaptation Programme of the UNFCCC, stressed the importance of integrating climate adaptation into the NDCs. Besides that, it is also critical to link the climate change and the global development ambition, such as Sustainable Development Goals (SDGs) and Sendai Framework on Disaster Risk Reduction.

“Implementing climate action is not only good for tackling climate change problems, but more importantly it improves sustainable urban development,” explained Liam Fee, Climate Change Specialist of UN Habitat referring to how countries’ should also integrate Sustainable Development Goals (SDGs) into the NDCs. “There should be a more transparent dialog between local and national level in defining target for SDGs,” he added.

“We can see that there are growing responsibilities of local/sub-national government to support NDCs implementation as well as SDGs, in terms if policy and infrastructure development. But besides that, we need more dialog to finance resilience and more commitment to manage the practice,” said UN ESCAP Chief of Sustainable Urban Development Section, Curt Garrigan.

Garrigan added that, as development trajectories would continue to increase global energy demand in the future, finding a less carbon-intensity alternative energy and transition to clean energy would be critical. It is also time to look at the economic benefit of implementing low-carbon development to encourage more cities to use clean energy.

In order to achieve that, countries’ need more financing mechanism, as national budgets and international support will not be enough to cover the needs. Thus, it is time for countries to start engaging the private sector to support the implementation of NDCs.

Besides that, Oehmen also pointed out that, while government plays the key role in implementing NDC, strong support from non-state actors—civil society organization, NGO, media, and religious groups—is crucial to ensure the implementation of NDCs.

“There should be less negotiation, and more working together to tackle the challenges of climate change,” Oehmen stated.

Going forward to 2018, countries’ should make a conscious effort to initiate a grand coalition, linking national government with states and cities, civil society, the private sector and the community for greater ambition in implementing the NDCs.