Semarang deals with various physical challenges due to its geography as a coastal city; it is known specifically for its frequent floods. There are 21 rivers located in Semarang, creating a high risk of flooding. In response to that, Semarang City Government has carried out several actions to reduce flood risk through the construction of Jatibarang reservoir, normalization of Semarang Flood Canal, and also improvement of the drainage system. However, 16 sub-districts along Semarang Flood Canal are still facing a great risk because of the high intensity of rain that is not backed up by an increase in the water holding capacity. That is why improving the infrastructure itself will not reduce the risk. Improving community capacity to response to flood also plays a crucial part.

For this reason, Mercy Corps Indonesia, in collaboration with Initiative for Urban Climate Change and Environment (IUCCE) and Initiative for Regional Development and Environmental Management (IRDEM), and with funding from Zurich Foundation, conducts capacity building in community preparedness to support Semarang City Government’s efforts to address and reduce flood risk through the Zurich Flood Resilience Program.

In light of the findings of a study conducted by the Zurich Flood Resilience Program, the community agreed to participate in capacity building for disaster preparedness groups that were established in eight sub-districts along the Semarang Flood Canal (Kalipancur, Manyaran, Bulustalan, Caben, Petompon, Bulu Lor, Kerobokan and Panggung Lor). The establishment of these disaster preparedness groups also supports Semarang City Disaster Management Agency’s resilient sub-district program. The disaster preparedness groups in each sub-district are invited to join capacity building that was conducted on 23–24 September 2017 at Jatibarang reservoir. Besides those eight groups, the Suko Makmur raft community that is based on Jatibarang reservoir was also invited to participate. 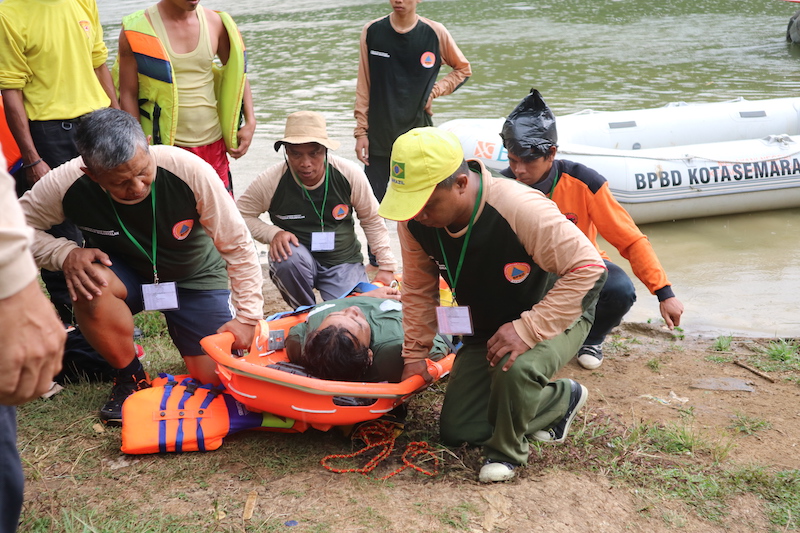 “The training was very insightful,” explained Agus Tri, a participant from Manyaran sub-district. “This kind of training helps us to be better prepared for any disaster. There were so much new information and techniques that I gained through this training,” he added. Some techniques that were shared with the participants, were how to make a simple tarp stretcher, how to operate a rubber boat, how to use a life jacket, how to rescue drowning people etc. Besides these, participants also learned how to give first aid to injured people, how to keep important documents safe when a disaster occurs, how to communicate with the Disaster Management Agency using walkie-talkie radios, and how to prepare evacuation shelters.