Originally from Visakhapatnam in India, Sasank Vemuri’s family moved with him to the U.S. when he was five years old. His connection to India, however, was never lost as Sasank and his family would frequently return to visit grandparents and extended family. Later in life his work would take him to Paris, Berlin, Delhi, and now Manila where he works as an urban resilience consultant for the Asian Development Bank.

Play our interview with Sasank

It probably comes as little surprise that Sasank describes himself as a “city person”, given the number that he has called home. He enjoys the process of getting to know a city, uncovering its secrets and character. As different as cities such as Berlin and Delhi ostensibly are, he can see the connections. In both places, he says, the people have an energy and excitement for life that translates into new and innovative business ventures and projects. Cities are connected by their vitality and by their people. According to Sasank it is the people that lend a city its unique character. It is this character that he values above all. Cities have the ability to foster a shared sense of community and tolerance that it is sometimes hard to find in rural areas.

Sasank’s commitment to urban resilience stems from his childhood. Since he was a small boy he has been aware of the differences between one part of the world and another.

“Since then I’ve been working to find ways of making those differences less stark.”

The realisation about the inequalities in life chances for people in his country of birth and around the world ultimately led Sasank to decide on his career path and study developmental economics to pursue it. After graduating Sasank set about applying his skills working at GIZ, the German agency for international development.

His job with GIZ also took him back to India. Being an avid runner, the lack of open spaces and the poor air quality were the most difficult things to adapt to him. After living in his native India, Sasank moved to Manila where he works with the ADB as a consultant for the Urban Climate Change Resilience Trust Fund (UCCRTF). The fund, now more than a year old, stands at $140 million and is financed by a range of donors including the Rockefeller Foundation. It focuses on urban resilience in Pakistan, Bangladesh, India, Philippines and Indonesia, supporting projects that focus on infrastructure development and those that take integrated, systems approaches to resilience building. 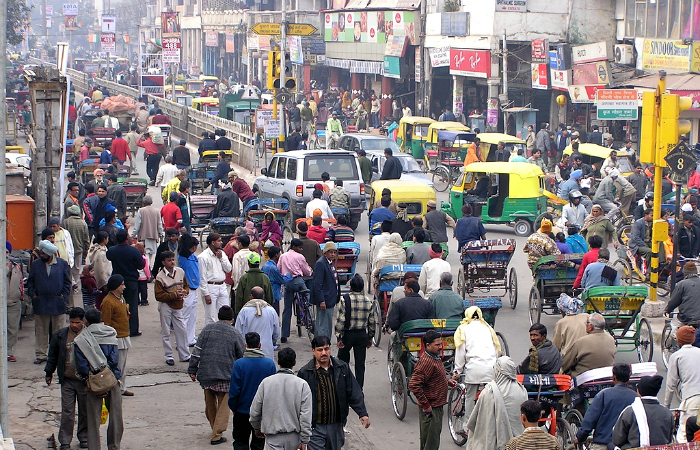 As Sasank found out, Dehli’s crowded streets are not the ideal place for the casual jogger. Credit: babeltravel CC by 2.0

Through his work in peri-urban areas, Sasank has realised that many of the problems faced by cities do not stop at the municipal boundary. This misconception he says, can be the source of significant environmental mismanagement.

“City officials are often charged with managing a city, or a small part of one,” he explains.

“But the challenges posed by climate change like flooding, they are affected by many factors relating to land management in the river basin, sometimes hundreds of miles from the city.”

Sasank also believes that building climate resilience is only truly effective when it considers the poorest and most vulnerable in society. The commonly used approach to ensuring that projects consider vulnerable groups is multi-stakeholder consultations and co-development. However Sasank warns that unless care is taken to ensure the process is rigorous, the approaches can be ineffective.

"We have to make sure that multistakeholder processes are designed so people can voice their concerns in a comfortable space in which they are heard,” he said.

Practitioners need to be conscious and considerate regarding cultural differences and should do their best to enable people to voice their concerns and interests.

Sasank’s passion for social justice and faith in people fuels his work at the ADB. He works to ensure that urban resilience building is an inclusive process. In order to do that, Sasank focuses on communicating the qualities of resilience. He views urban climate change resilience building as an iterative process. “There is no point in getting caught up in definitions [of resilience],” he said, “What’s important is that actions come from clearly defined intentions.” In this way projects can adapt to the needs of urban communities and develop with them.

Sasank is a self confessed optimist, who sees the best in people’s intensions.

“I think that major donors and development agencies are doing a lot better now at ensuring that their projects consider local communities,” he says.

“But what is not often asked is whether, local projects are doing enough to reach up to the regional and national levels”.

For Sasank it is vital for community-level initiatives to connect with regional planning so that they can show the value of their work and also to help planners to invest in larger-scale climate resilience building initiatives.

His faith in people’s ability to determine their own is reflected in his answer to the final question of his interview. Sasank was asked, if he had a million dollars to spend on urban climate resilience how would he use the money?

“If I had a million dollars of my own money? I would find a community that was very vulnerable to climate change and I would just give them the money. People are acutely aware of their most pressing needs,” he replied.

This brief from the UK Departmen for International Development (Dfid) gives an overview of the Urban Climate Change Resilience Trust Fund (UCCRTF) on which Sasank works. Here Sasank outlines some of the important lessons from his experience with the fund and investing in urban climate change resilience projects in Asia.