“Bangkok is a fascinating city.” Saengroaj opened up the conversation. He was born and grew up in Thonburi, the old capital of Thailand, which is located on the western side of the current capital Bangkok. He spent most of his childhood and youth, from primary school to college, in Bangkok.

He witnessed how Bangkok has developed rapidly over the last four decades. During 1980s-1990s, the city experienced an exponential growth in the number of high-rise buildings, modern shopping malls, and a series of infrastructure development. At the same time, Bangkok was also plagued with many problems, be it horrendous traffic congestions, uncontrolled land use, or air and water pollution. It was during this period that Saengroaj began to be drawn to his interest in urban development. He then took a master’s degree in urban and regional planning in the USA. Now, nearly twenty years later, while some of the urban concerns have been tackled, Bangkok is continuing to face problems related to water pollution, land use and flooding.

Based in Bangkok, Saengroaj is currently working as a Climate Change Adaptation Specialist at the USAID Regional Development Mission for Asia (USAID/RDMA). “What I like about working with USAID − Regional Mission for Asia (RDMA) − is the opportunities to understand development challenges from diverse sectors and see these challenges from a bigger regional perspective.”

Since joining USAID, he has engaged in various programs, from water resource management and water sanitation and hygiene (WASH), to post tsunami livelihoods rehabilitation, climate change adaptation, urban resilience, and energy. “I have travelled to different countries in Asia, learned about their specific conditions, their cultures, and employed approaches to tackle their problems.” He was glad to count himself among those finding and connecting solutions to solve city development challenges.

He highlighted the importance of strengthening the urban governance system so that it will ensure inclusive decision making. “Through USAID Mekong-Building Resilience to Climate Change in Asian Cities (M-BRACE) in Udon Thani and Phuket, Thailand, he learned that we need cooperation and commitments from multiple jurisdictions at both horizontal and vertical levels because urbanization is caused by, and affects, the areas around a city itself.” He added “Cities cannot address their resilience issues sustainably if they do not engage and receive commitments from the leaderships of other jurisdictions around them.” 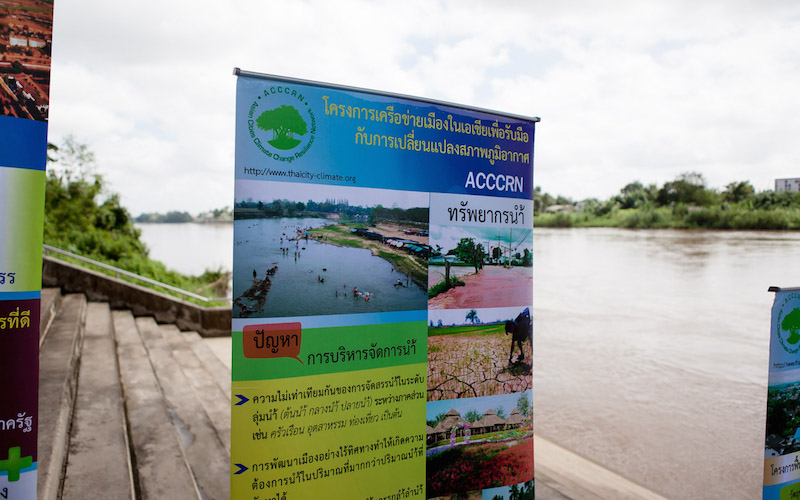 For him, building resilience means making a shift in working culture. “To make the urban areas become more resilient to hazards, shocks and stresses will require good coordination among different actors − which requires active engagement from all stakeholders both horizontally and vertically.”

As a development practitioner who works at the regional level, he hopes to continue supporting city sharing and learning to achieve the same ‘resilience’ goal. He believes that one cannot stop climate change effects from happening.

“We must all work together to make our lives, our communities, our cities, and countries become more resilient to its effects. More awareness of the effects must be heightened among government leaders, businesses, and citizens.”

How can we work together towards resiliece? Saengroaj explained that resilience plans must be devised and actions must be taken. The public and private sectors must collectively develop a pathway towards a resilient future that is realistic and actionable. He concluded that each one of us must change our habits that further contribute to worsening the effects of climate change.